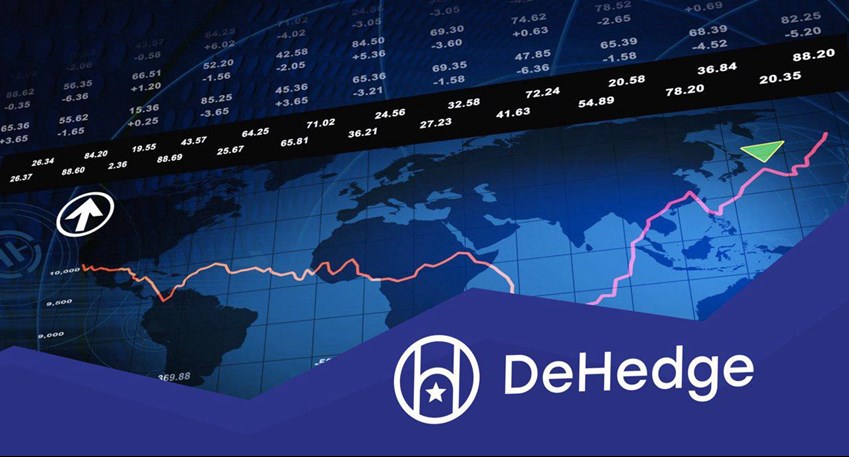 Every day new ICO’s are created, with newer and more innovative ideas, the industry creates great opportunities for investors and enthusiasts alike. Investing in cryptocurrencies and tokens is becoming very frequent nowadays. In 2017, the amount of funds invested in ICOs (Initial Coin Offerings), according to Coindesk, has exceeded $3.5 billion. Cryptocurrency tokens have an unprecedented growth in yield, while still being a highly risky investment asset.

However, It is important to note that investments in ICOs and cryptocurrencies also can have negative results that can match the gains of successful projects. There are many failed ICOs in which investors suffer losses or even end up losing their investments completely.

Currently, there are no solutions offering protection from the cryptocurrency market and no one to look out for the interests of investors. This leads to the appearance of fraudulent projects that conduct ICOs to gather money and quickly vanish. However, hedging instruments can become a solution in cases where the partial or complete loss of funds happens.

This is where DeHedge comes in, a company that is developing and implementing hedging tools for the cryptocurrency markets and ICO tokens. According to the DeHedge team, hedging is an effective strategy to protect against fluctuations in token rates and cryptocurrencies. Reducing the risk of investors, to a certain extent, also reduces their potential profit by the amount of the Hedge premium. The given provisions are defined below.

An investor acquiring a hedge in the amount of the cost of purchased project tokens receives compensation in the number of losses incurred in the event the price of the token falls. Thus, the investor pays the value of the hedging for the opportunity of receiving compensation.

Hedging takes place through the purchase or sale of a DeHedge contract on crypto-exchanges, provided with certain restrictions.

Pre-Sale and sale projects (Pre-ICO, ICO), tokens that do not circulate in the market, and projects the tokens of which are traded on crypto-exchanges.

Hedging Risks When Investing Into ICOs

DeHedge conducts scoring for projects that are just preparing for the initial placement of their tokens (Pre-ICO, ICO) based on criteria developed by its analytical team in cooperation with the largest Russian and international experts in risk assessment of investments in high-risk products, who helped composed an algorithm allowing DeHedge to assign a score to a project in the range from 0 to 100.

As a result of the scoring system, the project is either rejected (the sum of score points is below the specified minimum value) or undergoes an additional evaluation procedure to formulate proposals for hedging for DHT Token holders.

Based on the results of these processes, costs of hedging positions and significant conditions are assigned.

Users on the dehedge.com website and the owners of DHT Tokens can choose a project, the risks they wish to hedge, and the hedging time. A DHT owner chooses the project and the hedging period and pays hedging premiums by sending a DHT token to DeHedge.

The occurrence of a hedged event for projects entering the ICO stage is considered to be the fact that the market price of project tokens on exchanges is lower than their price stipulated in the DeHegde contract (usually the ICO price).

Information on the occurrence of a hedging event is published on the dehedge.com website in the personal account of the hedging purchaser and is additionally sent via email. DeHedge receives information about the drop in the rate of tokens via a crypto-exchange API, where the tokens that an investor has chosen to hedge are listed. The settlement function of claims for compensation of losses is automatic. The hedge compensation is paid through the Ethereum smart contract. Hedging payment is sent to the wallet details of the hedging purchaser.

Tokens that are publicly traded on crypto-exchanges.

It is difficult to forecast the exchange rates of publicly traded tokens. DeHedge provides investors with an opportunity to receive hedging coverage and hedge against token rates fluctuation during the hedging period.

Users of the dehedge.com site see the interface as lists of application tokens. Each token has several temporary options for hedging and price ranges. Each option for hedging rates has a cost. At the same time, the DeHedge White Paper 19 current average trading rate obtained by the API for each token is calculated on the basis of data compiled from at least from three different exchanges (if such data is available). This mechanism allows automatically receiving information on rates of cryptocurrencies or tokens without accessing the exchange's website.

DeHedge notifies the user of a hedged event by email. The user can enable a token price threshold crossing which triggers automatic compensation by DeHedge. In this case, DeHedge will automatically pay the hedging compensation. DeHedge pays hedging benefits to the hedged user’s crypto wallet. The hedged person is paid in the number of losses incurred or in full via exchange for the project's tokens that have fallen in price.

The DeHedge token (DHT) is an ERC20 compliant token built on the Ethereum blockchain. The token is used within the application to pay for hedging services.

10,000,000,000 (ten billion) DeHedge Tokens will be issued. 25% of tokens will be offered for placement during the Pre-Sale and ICO because DeHedge does not exclude the possibility of conducting additional rounds of sales to increase the main reserve and expand the scale of its business. DeHedge will be holding it’s Pre-sale on the 15th of March, 2018 and is expected to end it on March, 29, 2018. Contributors get 25% bonus during the Pre-sale and no bonus during ICO. The public sale is set to start in April, 2018. The hard cap for Pre-Sale is 3,000,000 USD and 30,000,000 USD for ICO.