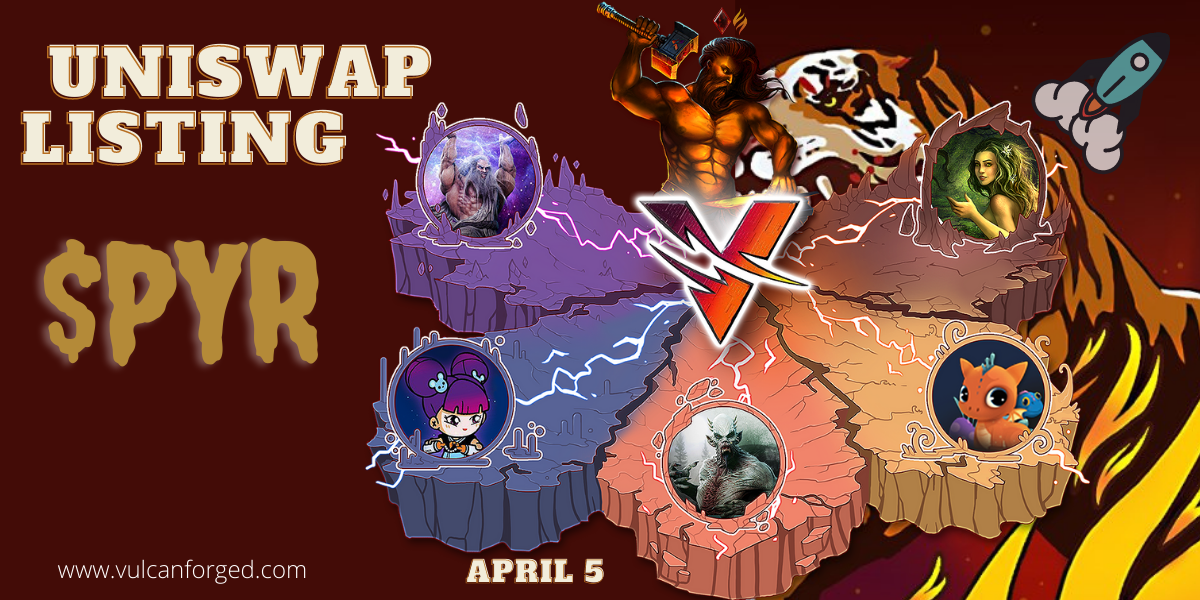 Recently launched VulcanVerse a Massively Multiplayer Role-Playing Game (MMORPG) platform is exciting for not only gamers but also the blockchain & cryptocurrency community alike. PYR the native token of VulcanVerser is scheduled to be listed on top decentralized exchange Uniswap on Monday the 5th of April. PYR got 8x oversubscribed in the private sale with starting market cap of $8 Million & a circulating supply of $20Million of $50 Million in total and is gaining high traction in both the gaming & crypto community.

Non-fungible tokens (NFTs) have been around since 2017, but their popularity exploded earlier this year with some of the most popular NFT marketplaces seeing trading, engagement & adoption volume in February exponentially comparative to the volume they saw throughout 2020. While some speculate it just to be a bubble the industry stands stronger than ever.

The NFT ecosystem is evolving constantly. From screenshots of the first tweet of Jack Dorsey, Twitter CEO selling at $2.9 million. Grimes, an artist, and singer, girlfriend of Elon Musk sold a bunch of NFT’s within 20 minutes of announcement on Twitter and bagged $5.8 million. These NFT’s were backed by someone with a high reputation just the way art does not define the price as much as the reputation of artists. This makes us wonder how much Picasso’s tokenized art would be. Things are changing very fast with more blockchain mainstream adoption, the world is getting very different now.

These non-fungible tokens are unique on a blockchain and with them, ownership can easily be verified & transferred. No one can copy, fake, or alter an NFT, making these digital assets ideal for confirming property ownership. Moreover, the community can be incentivized to detect fakes rather than filing a DMCA claim, the global users now are the gatekeepers of artwork.

VulcanVerse, a popular open-world massive multiplayer online role-playing game (MMORPG) backed by blockchain technology, Vulcan Forged, is now combining the growth of NFTs and their usability with another trend: yield farming. This platform will add a lot of value to gamers, creatives, and the crypto ecosystem alike. The revenue model will benefit all the entities looped in the ecosystem making the wheel gain more momentum, a dream come true to skilled competitive personnel.

NFTs in the Vulcan Verse

Vulcan Forged enables players to truly own in-game assets through NFTs. The primary owned assets for users in the game are Land, Vulcanites, Gods, and Items. Different assets give them different advantages, and these can be bought on the market, traded with other users, or foraged.

These assets are useful for a variety of reasons:

Improving items in the game may require staking PYR tokens. Staked tokens aren’t lost and will go back to the player once items level up.

In the game, players can access Vulcan’s Vineyard, located in the Olympian heavens, to farm NFTs. To do so they need to have a seed, which will represent an NFT that has to grow to then be harvested.

Seeds can be items and have to be planted in Vulcan’s Vineyard for a specific period with an amount of PYR tokens attached to it. In an example given by the game’s creators, a Vulcanite could find a seed representing an item that could be farmed at Vulcan’s Vineyard.

The seed would then have to be sent to the Vineyard – represented through a smart contract on the blockchain – with PYR for a specific period to grow. Once it grows, the item can be claimed.

Using the PYR token, Vulcan Forged is fostering a play-to-earn economy run through a series of decentralized applications. The game’s token was crafted with Polygon (MATIC.) The token can be earned in “a myriad of ways just by playing the many Vulcan Forged dApps.” Take a look at the marketplace where you can participate in trade and auctions with different assets in the VulcanVerse Platform.

PYR tokens are based on the Ethereum blockchain, but to play the game no cryptocurrency is required.

You can find out more about the PYR token through its whitepaper . You can keep up with Vulcan Forged by following it on Twitter, Medium, Telegram, Discord, Facebook or Instagram.