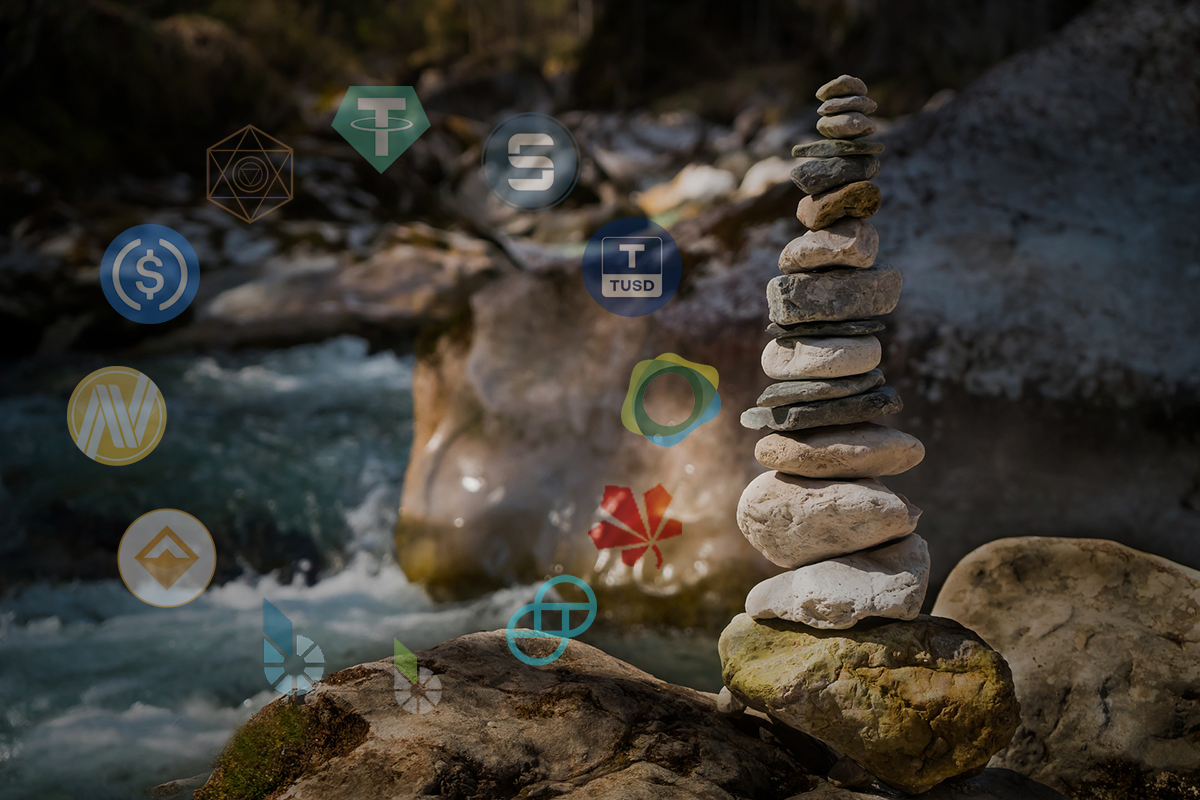 Cryptocurrencies allow users to exchange monetary value without the assistance of third-parties in finalizing transactions. Cryptographic assets such as Bitcoin (BTC), Ether (ETH), and Litecoin (LTC) are transferred between users on public, blockchain-based networks.

Although digital assets have introduced a unique way of conducting trustless, peer-to-peer (P2P) transactions, the prices of most cryptocurrencies are extremely volatile. For instance, the bitcoin price reached a low of around $3,150 in December 2018, however BTC is now trading around the $10,000 mark (at the time of writing).

Due to their highly volatile nature, it is impractical for many consumers and merchants to accept cryptocurrencies as a form of payment. In order to hedge against the volatility of cryptoassets and allow traders to store value in assets that do not experience extreme price fluctuations, several crypto firms have launched stablecoins.

Tether Ltd., the company behind the world’s first and most dominant stablecoin, USDT, had initially proposed the idea of issuing a fiat currency-backed digital asset in a whitepaper published in January 2012. Tether’s management had previously claimed that each USDT in circulation was backed by 1 United States Dollar.

On March 14, 2019, the stablecoin issuer revealed that USDT was now also backed by loans made to “affiliate” firms. Tether’s management further claimed that the $3.6 billion in USDT presently in circulation is backed by a combination of cash, “cash equivalents” and several different types of assets.

Many members of the crypto industry have alleged that Tether may not have adequate reserves to fully back the amount of USDT being traded in digital asset markets, although at the time of writing there has been no substantiated evidence to back up these assertions.

The New York Attorney General (NYAG) has conducted investigations into the business operations of both Tether and crypto exchange Bitfinex, and in April 2019, the NYAG accused Bitfinex of losing $850 million and then attempting to use borrowed funds from Tether to cover up the loss. The NYAG also alleged that Bitfinex and Tether illegally served customers in the New York area. The companies have strenuously denied the claims, describing the latter claims as “inaccurate and misleading.”

San Francisco-based crypto exchange Coinbase and Circle Internet Financial launched the USD Coin (USDC) in an effort to gain market share from Tether. Both Coinbase and Circle claim that each USDC in circulation is always backed 1-to-1 with the USD.

USDC holders can “always” redeem 1 USDC coin for $1.00 - which allows the USDC cryptocurrency to maintain a stable price. This, according to a blog post on Coinbase’s official website, which notes that for users that have a USD bank account, USDC is easily redeemable for its USD equivalent because the reserves are also held in a bank account.

As an Ethereum-based token, traders may store their USDC coins in any crypto wallet that supports transactions with Ethereum. According to Coinbase, the company’s goal is to create a globally accessible and open financial system, which includes giving everyone the opportunity to “enjoy the stability” of the most dominant fiat currency, the USD.

Allowing Unbanked or Under-banked Individuals to Hold Value in USD

As noted by Coinbase’s management, the USDC stablecoin allows unbanked or under-banked people to easily hold a USD-backed digital asset. Individuals and organizations (located anywhere) with access to an internet connection and a basic smartphone may acquire USDC coins.

The market capitalization of all USDC in circulation, at the time of writing, stands at $366 million according to CryptoCompare data. In addition to Circle and Coinbase’s USDC stablecoins, TrustToken, a San Francisco-based developer of a platform that issues asset-backed tokens, has introduced several new stablecoins including TrueUSD.

TrustToken’s TrueUSD Is Also Backed 1-to-1 with USD

According to TrustToken’s official website, TrueUSD holders can always redeem 1 unit of the stablecoin for $1.00 - which gives it a stable price. There are currently more than 70 different crypto exchanges that reportedly support transactions with TrueUSD. Additionally, TrustToken’s management claims that there are over 20 over-the-counter (OTC) desks, located throughout the world, that allow users to buy and sell TrueUSD coins.

Other major stablecoins include the Paxos Standard Token (PAX), which has been designed to leverage the stability of the USD and the efficiency of distributed ledger technology (DLT). As explained by its creators, traders and investors throughout the world can exchange PAX coins instantly - which is essentially the same as sending and receiving actual USD.

PAX coins allow users to “enjoy the stability” of the USD as users are able to easily convert the stablecoin to cash or use it to pay for goods and services when shopping online. The Paxos Trust Company, the firm behind the development of PAX tokens, has hired Withum, an established auditing firm, to “independently” verify at different points in time that the number of PAX coins in circulation are consistent with the amount of USD held in reserves by Paxos (the company).

The Dai stablecoin, which presently has a market capitalization of around $89 million with each Dai coin trading at $0.984817, is fundamentally different from other price stable digital assets. This, as Dai is backed by Ether (ETH), the Ethereum blockchain’s native token - instead of major fiat currencies.

According to Maker (a Santa Cruz, California-based creator of a decentralized autonomous organization, MakerDAO), the Dai stablecoin is the “first” decentralized, Ethereum-based stablecoin that may be considered a “hard currency” for the evolving 21st century global economy.

Around 2% of ETH In Circulation Held in DAI Stablecoin Ecosystem

According to Kerman Kohli, the Founder of the stablecoin-based 8x protocol, Maker’s decentralized lending system has achieved a significant 20% “month-to-month growth” rate (as of March 2019) - in terms of the outstanding loans, issued in Dai.

Kohli also revealed that approximately 70% of borrowers spend their Dai almost as soon as they acquire it. Notably, the DAI ecosystem holds around 2% of all ETH in circulation through a smart contract.

Gemini Dollar (GUSD) Is Always Backed 1-to-1 with USD

The Gemini Dollar (GUSD), which has a relatively low market capitalization of about $12.3 million, has been developed as an ERC-20 compliant token. As a stablecoin backed 1-to-1 with USD, users may send and receive USD through the Ethereum network.

In a manner that’s similar to other stablecoins, GUSD may be redeemed at any point for 1 USD on Gemini, the Winklevoss-owned cryptoasset exchange. Issued by the Gemini Trust Company,

the GUSD in circulation is backed by an equivalent in USD reserves, which are reportedly held at the Boston, Massachusetts-based State Street Bank and Trust Company, the world’s largest custodian bank.

On June 18, 2019, Facebook released a whitepaper and a website that revealed how the American social media firm would create its own cryptocurrency, called Libra. According to its technical documentation, Facebook plans to issue a digital asset that will be backed by the equivalent in fiat currency reserves.

WhatsApp and Facebook Messenger users will be able to send and receive payments in Facebook’s stablecoin - which may be stored in a standalone wallet app, called Calibra. At present, the Libra project is still in its development stages, with the testnet launched in June 2019.

The social media giant is planning to launch the Libra mainnet in 2020, however regulatory authorities throughout the world have asked Facebook to provide additional information about their crypto-related project. Lawmakers have also asked Facebook to halt the Libra project due to potentially “massive risks.”