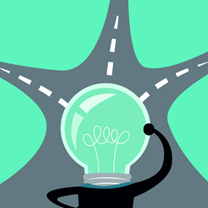 A fork is occurs when two miners find a valid hash within a short space of time.

They both spread the solution for verification to their neighbours.

The problem is solved by the part of the network that finds the next block, as this blockchain is then said to have more difficulty – or higher complexity. The other part of the network will then make its blocks redundant and adopt the 2 blocks of the longer half of the blockchain. The block that it thought was the solution will then be stored in a pool as an orphan block. This is called blockchain reconvergence.

This brings up an interesting problem with other crypto currencies, for example litecoin, where the targeted block time is set to two and a half minutes instead of Bitcoins ten minutes. As the block time is less with Litecoin there is a higher probability of blocks being solved within seconds of each other and causing a Litecoin Fork.

This is the compromise between transaction confirmation and network forking – for example Fastcoin with a block target time of less than thirty seconds will create a multitude of forks.

Ethereum has got around this issue by using the Ghost protocol which rewards uncle blocks - blocks that are valid solutions but not included in the blockchain itself.