This is a sponsored story. Its content does not constitute financial advice. Please remember that the value of investments, and any income from them, can fall as well as rise so you could get back less than you invest. If you are unsure of the suitability of your investment please seek advice.
GAUGECASH is the world’s first Decentralized Monetary System that will be available to anyone anywhere. Unlike most prominent stablecoins that peg the price and value of the asset 1:1 to the USD, the Gaugecash protocol derives its price and value from decentralized financial systems, elegantly solving the centralization risk that a USD peg represents.

The protocol consists of two tokens: GAUGECASH (GAU), which is an index of world currencies, that as a whole is more stable than any single fiat currency including the majors (GBP, EUR, USD, JPY), and GAUGEFIELD (GAUF) the protocol’s liquidity token that backs up the GAU.

What are the challenges of the traditional monetary system?

Traditional financial systems rely on central authorities that dictate economic policy based on the fiduciary trust that society places in them. In a perfect world, central bank authorities act in good faith and design policies that factor in the complexities behind the economy to the best of their ability.

An important thing to consider is that most of the economic data from which central authorities derive policy are not provided to them in real-time; the data is always out of phase. The consequence of this is that they never have a “real picture” of the economy and make decisions based on outdated data. These decisions take a long time to make the desired impact on the economy. In the end, they can only make approximations, or one could argue almost educated guesses and with this data model the economy and dictate policy.

Factors behind the time rate of data collection and the time it takes for the policies to produce the desired results can be attributed to outdated technologies used by central trusted authorities and society, such as cash, traditional accounting methods & the numerous authorized agents that comprise the system. Most of these factors can be significantly mitigated or eradicated with a transition towards better technologies.

Still, there is one factor that cannot be mitigated, the model’s reliance on trust. This factor will always be a flaw that can be exploited by corrupt, negligent, irresponsible, or, to put it bluntly: fallible agents. Famed 20th century economist John Maynard Keynes once said:

“By this means (fractional reserve banking) government may secretly and unobserved, confiscate the wealth of the people, and not one man in a million will detect the theft”

Through globalization, the modern international monetary system has been extremely successful in bringing prosperity and overall raising standards of living across the globe. Nonetheless, the flaws of the central bank model have been gamed continuously throughout history.

The boom/bust cycles some policies generate in the economy have always been exploited by actors who, whether by design or opportunity, corrupt the system by instituting a rent extracting model of wealth erosion and transfer that stagnates innovation and creates vicious impoverishment cycles.

A significant number of cases can be mentioned, going back all the way to England around 1750 when property rights enabled land to be used as collateral for projects. This was an important step that significantly fueled growth.

Still, it can be argued that through time and monetary policy, sudden spikes in the interest rate generated defaults on payments and hard asset forfeiture in favor of a privileged few. This pattern repeats itself throughout history, with the most recent case being the 2008 crisis.

Why is GAUGECASH the first decentralized monetary system?

GAUGECASH demand from the Scarce liquidity Pool GAUGEFIELD can be modeled as a Nash equilibrium in Bayesian Games.

We will make it simple going forward using the transparency and immutable properties of the blockchain tech in itself so DEFI investors can track the Value and Liquidity of the Development.

What is Chainlink and why is Gaugecash integrated with Chainlink?

GAUGECASH has integrated market-leading oracle network Chainlink to access a GAU/USD decentralized price feed. The Chainlink-powered GAU/USD Price Feed will ensure that the Gaugeindex is priced against USD at fair market value and without possible tampering.

Chainlink’s market-leading oracle networks provide us with a proven plug-n-play oracle solution that currently secures billions in USD value across DeFi. Chainlink being the new oracle solution for GAU/USD is a critical element to our design in bringing off-chain FOREX market data into blockchain ecosystems. Although initially launched on Ethereum, the GAUGECASH system is fundamentally blockchain agnostic, thus we require an oracle like Chainlink that supports various other blockchain environments.

We chose Chainlink because of its clear superiority in technology, security, and market dominance. Some of the Chainlink Price Feed features that add significant value to GAUGECASH include: 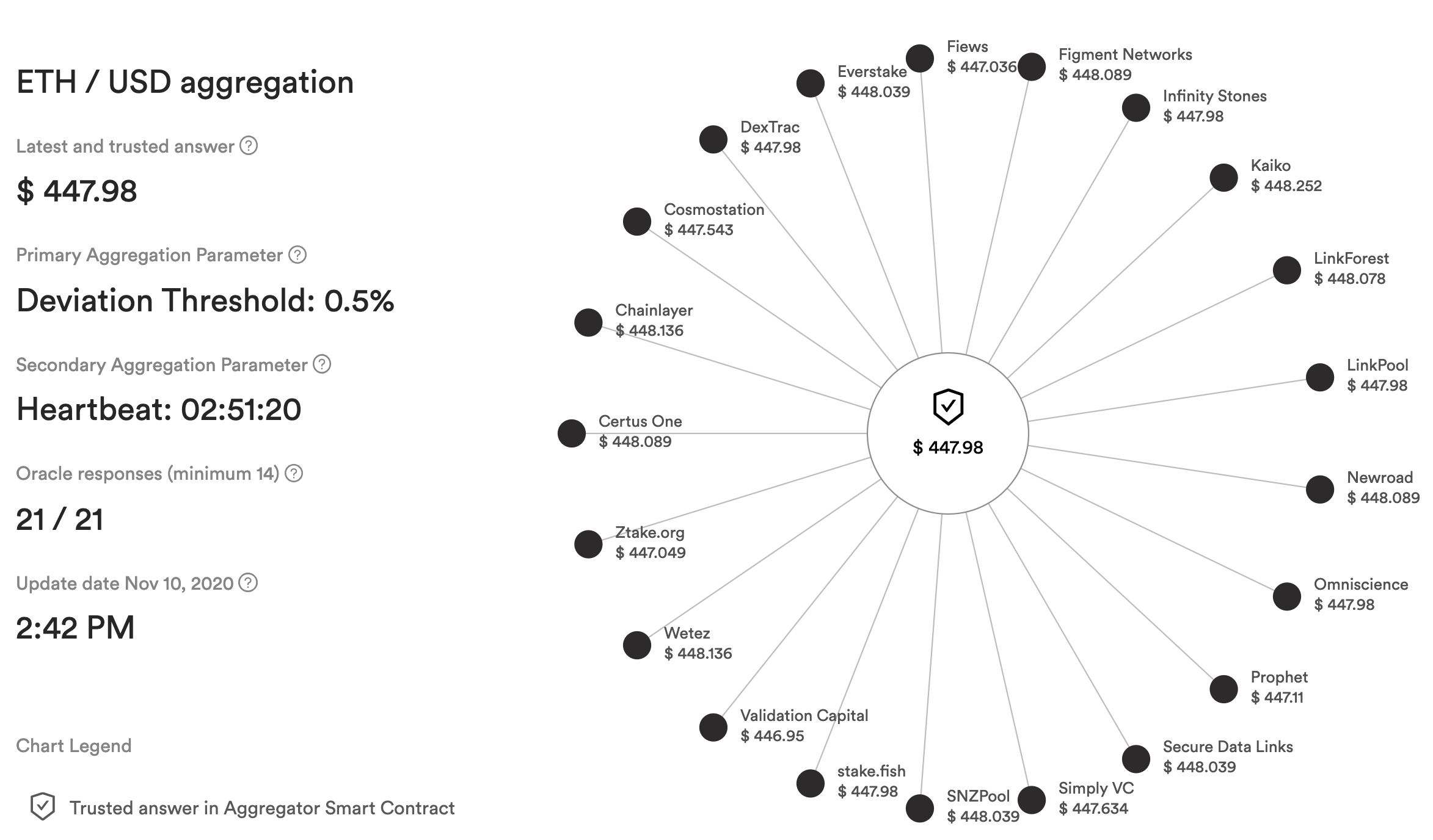 An example of the Chainlink ETH/USD Price Feed showing a transparent visualization of oracle network activity.

“GAUGECASH is bringing a new monetary decentralized system, empowering users to make stable payments on-chain or store value while hedging against the volatility risks of any single fiat currency,” said GAUGECASH Founder Manuel E. Blanco. “Chainlink will provide us with time-tested oracle infrastructure to ensure that users relying on GAU are always receiving fair market exchange rates when utilizing them for pricing goods and services around the globe.”

Chainlink is the most widely used and secure way to power universally connected smart contracts. With Chainlink, developers can connect any blockchain with high-quality data sources from other blockchains as well as real-world data. Managed by a global, decentralized community of hundreds of thousands of people, Chainlink is introducing a fairer model for contracts. Its network currently secures billions of dollars in value for smart contracts across the decentralized finance (DeFi), insurance and gaming ecosystems, among others.

In the last century-plus, there have been around thirty "Non-Domestic Currency Debt Crisis (typically inflationary deleveraging) ", causing millions of people to lose their wealth and transactional value.

Solution: We have come with the First Decentralized Monetary System Available to anyone anywhere, and we have named it, GAUGECASH. It has two main components

This creates a self-reinforcing economic system that brings unbelievable value for Investors and Users in a Decentralized and Immutable Fashion.

This can be one of the most profitable ventures for investors around the world, just because we can compete for the first time in history with a DEFI Solution with the largest financial market in the world, the EUR/USD who transact 6 Trillion USD per day.

At the live pre-sale you can buy tokens at the discount price of $0.15. Learn more about the project and the pre-sale at www.gaugecash.com