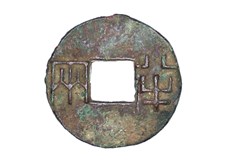 If you wanted livestock and you had corn, you would have to find someone with livestock who wanted corn – a coincidence of wants.

However, if you had fruit that ripened in June and wanted corn that was harvested in September, it was more difficult as the fruit had perished.

This is where a medium of exchange, a unit of account and a store of value came in – an intermediary of barter.

In the earliest occurrences of trade via a money, the most useful and reliable items gained the widest acceptance. In 12,000 BC there was evidence of Obsidian trading in Sardina, which evolved into livestock and grain exchange in 9,000BC as societies moved from a nomadic to a pastoral existence. As the more basic needs of human existence were met, new jobs were created through scientific advances that dealt with more advanced, luxurious concerns. Labour also became a source for exchange as its division and specialisation demanded a widely accepted monetary unit.

The next change was in 3,000 BC with the Bronze age, where copper and tin were combined to make durable tools that increased productivity and power of states with the requisite knowledge. The new commodity money became metals in various weights. An example of this is word Shekel which originated in Mesopotamia at the end of the 3rd Millenium BC where it was used for a measure of barley which related directly into weights of silver, copper and bronze.

Coins themselves were minted at the start of the first millennium BC with the first known state enforced stamp and guarantee of weight and value in Greece with Pheidon in 700 BC. Naturally coins were faked, but the first intangible concept was being introduced – a mark of a state conferring reliability. When state supply of metal was low, ancient governments reduced their metal content and attributed more value to the trademark. Money was becoming more fiat.
With the Renaissance, growing Mediterranean trade and the rule of law, came bills of exchange and banks – the first form of paper money or basically a promise to pay guaranteed by a third party or the individual if credible. The idea was to be able to make a deposit in one town, give over the bill of exchange for goods in another, with the recipient who could collect his cash from his local bank.

Money based on credit was where banks lent money depositors had stored with them for profit, as they had excess assets sitting idle in their vaults, and as a depositor you could earn money by storing the money there instead of paying for it to be stored under lock and key. This was the start of the fractional reserve banking system. The institution or bank could create and lend money based by public perception and faith. This paper money was redeemable for gold or silver and other assets the bank had under deposit. If there was a loss of faith in a particular institution a bank run could occur. The system had become unstable although it could facilitate wider growth and advance.

Bank Notes were gradually replaced by the issuance of national paper money controlled by Governments and their central banks. In the UK this happened in 1694, but only occurred in America in 1913 with the establishment of the Federal Reserve – prior to which there were up to 5,000 individual bank notes from various institutions – the larger the institution was the more widely accepted its scrip/banknote. These Government notes were still backed by nominal amounts of gold or silver.

The Wars of the twentieth century effectively put an end to commodity backed money. Redemptions to gold, meant governments could not support macroeconomic changes such as recession or credit crunches with monetary policy – only governments with gold in the ground could respond in type. The Gold standard officially came to an end in 1976 after the Vietnam war, when international money became purely fiat, backed only by the Government that issued it.

The problem with a Fiat monetary system is that individuals can see their savings dwindle, as monetary stimulus increases supply and decreases purchasing power and makes an inherently unstable monetary system according to the Austrian School of Economics. One set of solutions to this are Crypto Currencies whose added benefits are low transaction fees, defined supply and decentralised nature – the potential to dominate international monetary payments and the potential to revolutionise money.