Banking institutions are still inaccessible to a large portion of the world’s people, an issue affecting those in both developing countries and developed countries. Today, an estimated 2 to 3 billion adults throughout the world have little or no access to the services provided by traditional financial institutions.

Given the human knack for ingenuity, people without access to traditional platforms often look for an alternative.

In order to fight financial exclusion, several organizations have taken measures to provide financial services like loans and savings to the unbanked and under-banked populations of the world. Microfinance institutions, for example, have provided financial services to many people in developing countries, many of them workers in the gray economy. These organizations fund income-producing activities and support small businesses.  Unlike traditional banks, they rely on relationship-based banking and group-based models to provide loans, often times allowing the borrower to become self-sufficient.

Many times, the loans offered by these organizations are used not for investment, but to buy basic goods like food and medicine. Although this relieves poverty, it has a long run negative effect of putting many people into debt.

One of the most popular alternatives to microfinance is known as reciprocal aid.  In these organizations, both the lenders and receivers of the financial services are also the ones that provide them, acting as shareholders. This ensures the members of the organization must work towards a direction that helps both the organization and themselves.

ROSCA stands for Rotating Savings and Credit Association, and is a form of reciprocal aid. It’s a mutual lending platform that allows the user to both save and borrow funds, depending on the situation. A ROSCA acts as a simultaneous peer-to-peer banking and peer-to-peer lending service, and is most commonly used in developing countries where financial exclusion is prevalent.

Individuals that usually have a certain degree of trust due to communal bonds like family ties, culture, language, or religious affiliation will come together and form a ROSCA. Meetings are scheduled and in each meeting, the members of the ROSCA will pool together funds, with each member contributing an equal pre-determined amount. One of the individuals (usually the one with the most urgent need for funds) will then take the whole sum.  In the following meetings, the process is repeated with a different member receiving the funds, until every member of the ROSCA has had a chance to take the whole pool.

This system can be employed to reward savers by charging a small fee to the ones that take the pot first and giving the fee to the ones that use it last. Not only do ROSCAS promote saving, they also allow individuals to access larger amounts of capital in order to put money to productive use. For example, the funds from a ROSCA payout can be used to start a business or to buy farming supplies, for example.

In ROSCAs, the social element comes into play. Members of ROSCAs are more motivated to save due to the group nature of the organization.  Members are also motivated to pay back their loans, based on the close relationship they have with the other ROSCA members. Therefore, trust between members is a crucial element of a successful ROSCA.

However, these organizations have had their share of problems, mostly owing to their closed nature and geographically bounded limitations.

WeTrust was created in order to provide a global and transparent solution for reciprocal aid systems, ensuring that these can be accessed by anyone with an internet connection. Since ROSCAs only exist in certain limited locations and require a trust bond, many people don’t have access to them. WeTrust plans to change this with their first product, the ROSCA dApp platform. The platform not only ensures that ROSCAs are global, it also provides a more efficient way of creating and joining them.

The WeTrust ROSCA Dapp is a credit and savings platform which allows users to frictionlessly lend and borrow from each other at self-determined interest rates. WeTrust is being built to create a competitive alternative asset class for savers, to promote group savings as a way to reach individual saving goals, and to create an inexpensive path for the two billion unbanked to obtain and track their savings and credit.

How does WeTrust ROSCA dapp work?

Upon downloading the WeTrust ROSCA app, users will be able to create an account, after which they can join an existing ROSCA or create their own ROSCA. Once the ROSCA has the required number of members, users will pool together their money at regular intervals, and the money will then be available to one member of the ROSCA.

To determine who receives the funds from the ROSCA, users will make bids on the pot based on the  urgency of their need for capital. The bidder that has the lowest offer will take the pot. For example, if the pot is $40 and the lowest bid is $35, the remaining $5 will be split evenly by the remaining members.

When the ROSCA ends, the members that have saved and taken the pot last are rewarded with the leftovers from the earlier bids. Members who were the first to take the pot, although they have to return a higher amount than what they borrowed, still had access to a large pool of capital which they did not have before and in a timelier fashion than the other ROSCA members. 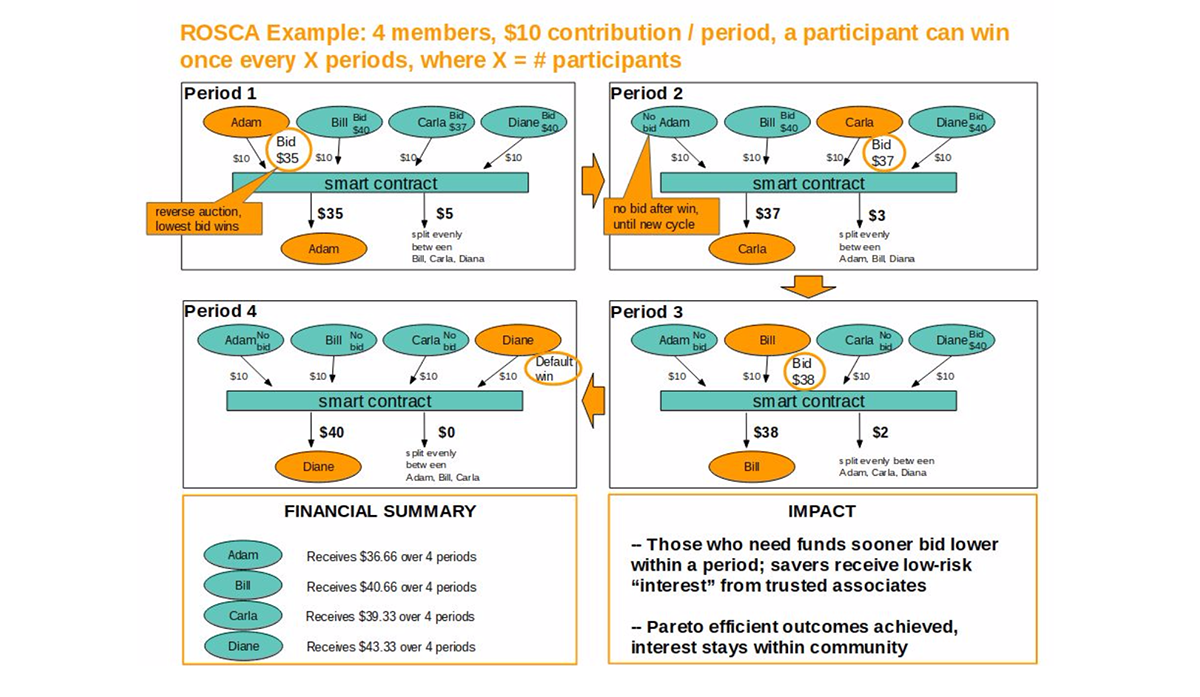 To learn more about WeTrust and its ROSCA platform, read the whitepaper and join the official Slack channel.