Bollinger Bands were invented by John Bollinger and a re a staple technical analysts tool when charting the markets. Bollinger bands provide an upper bound and lower bound based on a simple moving average. A bollinger band is basically indicating the volatility of a asset and whether it is moving outside of its expected price ranges and breaking trend and shows where the strong support and resistance levels are.

What are Bollinger Bands?

The more quiet a trading period that the bollinger band is based on then the bands themselves contract around the price and become narrower. Sometimes traders use the narrowing to indicate a consolidation period before an increase in volatility - this is useful for knowing when to buy options based on particular strategies such as vol straddles.

How do Bollinger Bands Work? 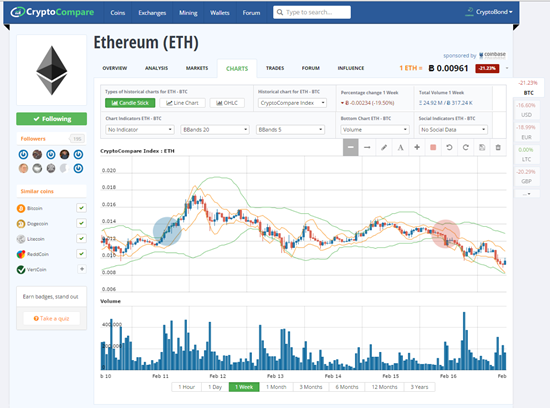 If you look at the chart above of the ETH-BTC price you can see two bollinger bands overlayed on the chart - the BB 20 and the BB 5. The BB 5 is much more reactive to recent price swings and shows a smaller band level around the price in comparison to the BB20. Conversely tbe BB 20 show wide bands and lag after a price move more as they take into account a longer set of volatility.

The first blue marker shows the ethereum price moving against both the BB5 and 20 upper limit and the BB5 corssing the BB20 - both indicators of trend reversal or a shift in momentum. The second red marker shows the opposite.