A Moving Average Convergence Divergence indicator or MACD for short is based on moving averages such as the simple moving average or exponential moving average. This guide will show you how to trade cryptocurrencies such as Bitcoin and ethereum using an MACD. A nine day EMA of the MACD line is often plotted in conjunction with the MACD line and their cross over points are used as buy signals looking at a change in the rate of change of momentum - kind of like a second differential or to put it simply acceleration instead of velocity!

What is the MACD Indicator?

A MACD is another momentum based indicator and looks at two specific EMA's - in our charts we use the EMA 12 and the EMA 26.The MACD is used in conjunction with the signal line that is simply just an EMA 9 of the MACD itself. The MACD itself moves up when the shorter EMA is going up faster than the longer term 26 EMA. The signal line is used to point out a buy signal when it crosses the MACD from above and a sell signal conversely. When the price moves suddenly and the short term EMA pulls away from the long term EMA this is often indicative of an overbought phase in the asset.

How do MACD Indicators Work?

The MACD is a measure of the convergence and divergence between the two EMA's and is calculated by subtracting the two of them. The signal line is constructed by creating an EMA 9 of the signal line. 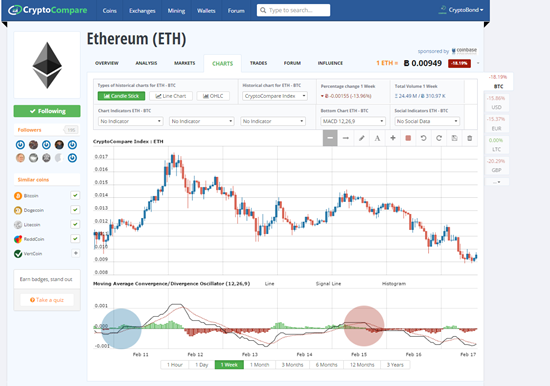