The Aroon indicator is a used to identify trend reversals in the underlying asset and the probability of that trend reversal will take place. The Arron indicator is comprised of two lines which indicate a downtrend and an uptrend and their strengths. The premiss behind the indicator is that the price will close at higher highs in a bull market and lower lows in a bear market.

What is the Aroon Indicator

The Aroon indicator was developed in 1995 and shows two lines - the arron up and the aroon down - which fluctuate between 0 and 100. The aroon up signifies a strong uptrend and the aroon down a bear market when it is near 100. The period of the aroon indicator can be changed to be more sensitive to the market. The smaller the period the more sensitive and vice versa for a longer period.

How does the Aroon Indicator work?

The Aroon indicator is calculated by looking at the number of days since the highest high and the same is true of lows and the aroon down indicator. The calculations are shown below: 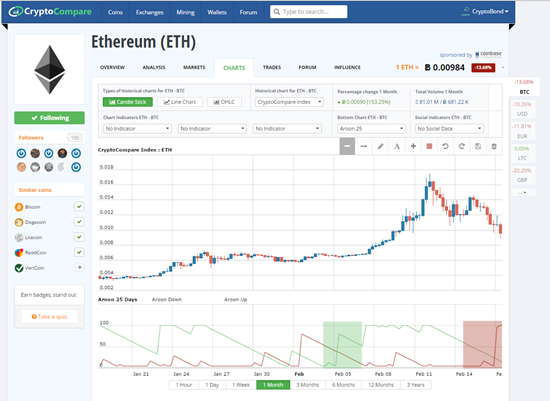 If you at the Ether BTC price chart you can see two clear periods where the aroon indicator indicates an uptrend and a its reversal. The green box shows the aroon up reaching 100 and crossing the aroon down and the red box the reverse.