Choosing a cloud mining contract can be difficult - knowing how to price it or whether its a good deal and even if its legit - there are pitfalls left right and center. But here at CryptoCompare we've tried to make the process as seamless and easy as possible by creating a set of metrics to give you an idea of exactly how an ethereum, bitcoin or litecoin mining contract works.

You can buy a cloud mining contract with Hashflare or Genesis Mining.

We try to make it as easy as possible for you to compare bitcoin, Ethereum and litecoin mining contracts by ranking them and using live data to give you all the metrics you need to make a decision. If we don't think the contract provider is legit - we say so - and if the stats say the contract makes no sense - we let you know that it isn't profitable. 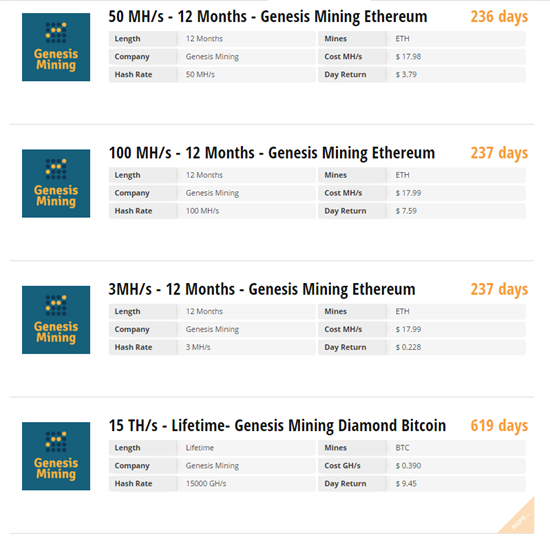 You can rank and filter by companies and return by day or reviews in our mining contract list. You can filter by what you want to mine or how long the contract will last.

Some contracts aren't even profitable with present market rates. We calculate the profitability by seeing how many days the contract takes to pay back the money invested. We do this by working out the daily return given the present hashrate of your contract and the network and then subtracting the appropriate fee if necessary. The figures we use can be found at the bottom of the page as shown in the picture below. 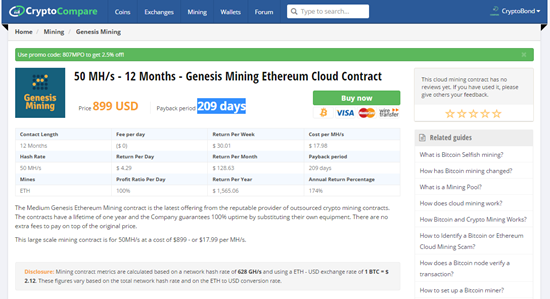 We also give a wealth of other information - such as the expected return per year - the 174% above means the contract will pay you back your initial investment of $899 dollars and give you a return of 74% on top. We also show you the cost per MH/s, the return per week, month and year - all depending on the network hash rate which is 628 GH/s and exchange rate of $2.12 - these can vary a lot so the returns that we show can vary a lot - these are just best guesstimates using our data - which we take a lot of pride in. 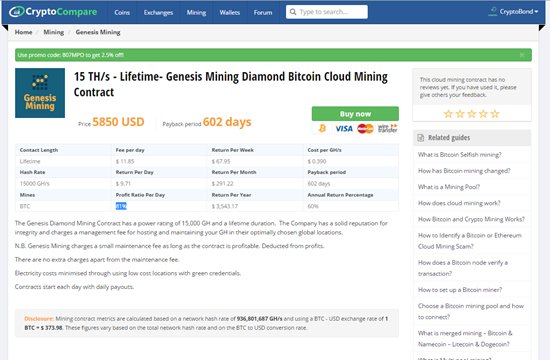 A lot of contracts appear and then seem to payout for a period giving an air of legitimacy. Then suddenly they stop paying and a suspiciously similar website with similar offerings reappears. We list some new providers but issue warnings at the top of the page if we believe the provider has not given sufficient evidence of their Bitcoin mining operations. Ideally we want them to give us a guided tour of their facilities on Skype, and we believe that if they don't do this then something is up! You can read more about how to detect a cloud mining contract scam here.

We also provide reviews for all our cloud mining contracts so you can see what other people have experienced with the provider.

Some mining contracts terminate when they become unprofitable. You need to read the contract carefully to see if this is the case. Some providers own your contract until it pays back what it owes for being kept on when it is unprofitable - and only then do you start receiving payouts again.

So a word to the wise - read the fine print!

Also due to the razor thin margins of the industry, and the huge amounts of volatility involved, make sure you are aware that some Companies, even if they are legitimate (or trying to be), can go out of business in the blink of an eye. Caveat Emptor!

If you have any views on how to make this clearer and make sure no-one else gets ripped off by unscrupulous providers - please let us know in the comments section below - and lets clean up this industry for the benefit of everyone!