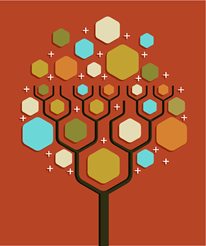 A Merkle tree is like is a binary tree like structure that condenses all the transactions to be hashed into a block.

The way it works is like a traditional binary tree.

Merkle Trees are used in many cryptographic functions to provide efficient data storage and reduce the level of data needed to prove something exists.

The corresponding answer after the merkle tree has been calculated is the merkle root – again a 32 byte number. For each miner, the Merkle root is generally different as the way each miner orders the transactions is different and so the hashes are different.

This means that all the miners aren’t running through the same set of calculations when they are applying their ASIC’s through brute force to solve the proof of work.