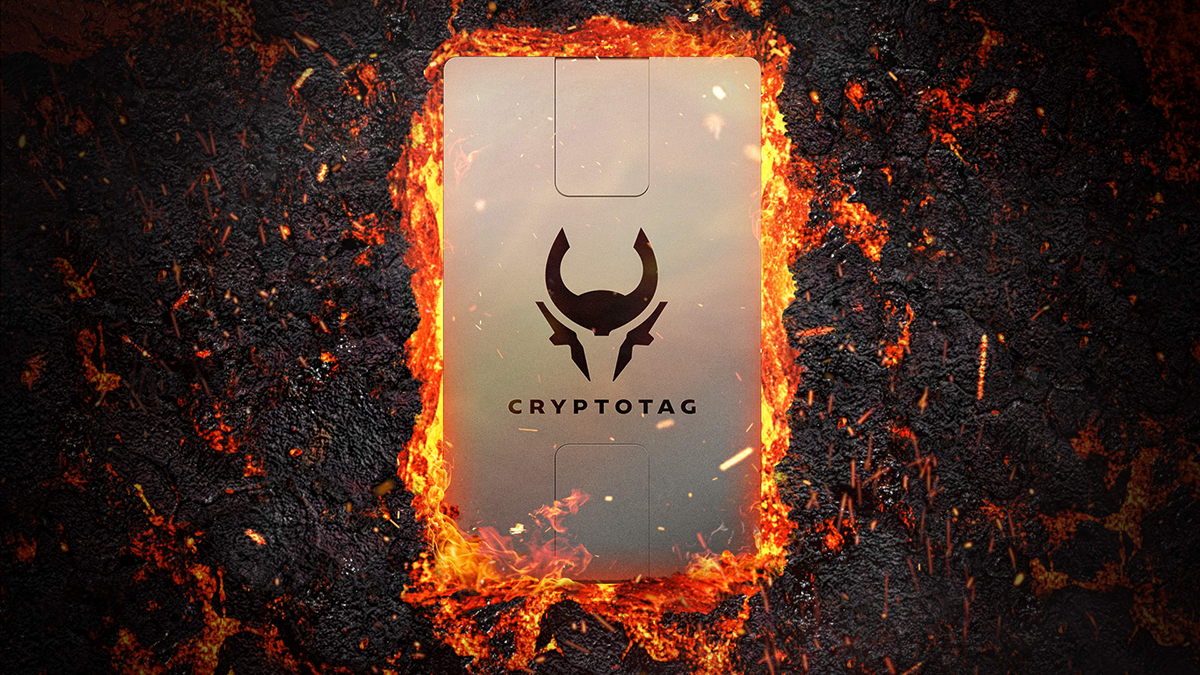 All cryptocurrency/cryptoasset storage solutions exist on a gradient of options. The two poles of this gradient, one could reasonably argue, are convenience on one end, and safety on the other. Wallets stored on the internet, especially in the custody of one or another service – most likely an exchange – are as convenient as most email services, but they are vulnerable to an array of attack vectors by which the private credentials may be stolen. This has happened often and will, no doubt, continue happening as long as people store cryptographic assets online.

About in the middle of this range of options are hardware wallets, which are essentially glorified USB sticks loaded with high-security and proprietary software designed solely to store private cryptoasset credentials. While is it presumably quite difficulty to crack one of these, it is definitely not impossible. However, these devices do offer a huge increase in security over exchange or hot wallets while still being quite convenient.

On the extreme other end of this range is CRYPTOTAG, who make the hardest and most secure kind of wallet of all: A physical product made from titanium with no electronic or computing parts to speak of. Impossible to hack by definition, and very difficult to physically destroy, you can feel completely and utterly safe storing any amount of crypto on one of these storage devices – as long as you put it in a safe place(!).

The second product from CRYPTOTAG is hitting the market, the “Zeus”, which is significantly leaner than its predecessor the “Thor”. The starter kit comes with two titanium slabs upon which private cryptographic credentials are to be inscribed, using the Bitcoin Improvement Proposal 39 (BIP39) protocol.

BIP39 allows a deterministic wallet to be generated using a human-readable set of English, Japanese, Korean, Spanish, Chinese, French, Italian, or Czech words. A small set (usually between 12 and 24) words are randomly selected from a 2,048-word list. These words, entered correctly into a BIP39-compatible wallet, make up that wallet’s private key and can be used to rebuild it. It is important to note that many wallets use BIP39’s system, not just Bitcoin – and thus, Zeus is compatible with a healthy array of wallet solutions.

What’s more, this kind of wallet can be set up so that it never even touches the internet in its entire existence, until funds are transferred out of it. For example, wallets that are generated from an offline https:// file (here, for example) on an air-gapped computer, and mined to, have no contact with the blockchain until funds are sent from those wallets.

Essentially, the Zeus refactors a “paper wallet” into a titanium one. Paper wallets themselves can be very safe and secure, as a method of storing private keys. Private keys that are printed out (although printing is indeed a security hazard) or written out, and kept completely away from the internet until it’s time to use them, are essentially unhackable. But, obviously, if the private credentials are inscribed on actual paper, there is one glaring vulnerability: Paper. Paper burns, smudges, decays, etc. The Zeus therefore takes all the benefits of a paper wallet and metal-izes them.

These 12 or 24 BIP39 words are inscribed on the Zeus’ plates with a very simple method: A four digit number corresponding to each word’s sequential number on the official BIP39 word list is punched into the plates, on specially etched fields on the slabs. You don’t even have to worry about not spelling the words perfectly, as having access to a BIP39 word list is the only prerequisite for deciphering the numbers.

Everything you need to etch your private keys comes in the CRYPTOTAG box, lovingly shipped by FedEx to wherever you are. (CRYPTOTAG even include the quintessential Dutch sweet, the Stroopwafel, complementary in the box.)

There are two slabs of solid titanium, which each hold 12 keywords. This is enough to back up one Ledger or two Trezors, and any other wallet that uses the BIP39 standard (for example, the slick Exodus GUI wallet). Two metal clips hold the slabs together, and there is barely a millimeter of give between them even with only one of the clips installed. You wouldn’t feel unsafe firing this thing out of a cannon, it is clearly going to survive. Impressively, CRYPTOTAG will also engrave any phrase you wish onto every set you order, in any font you want. 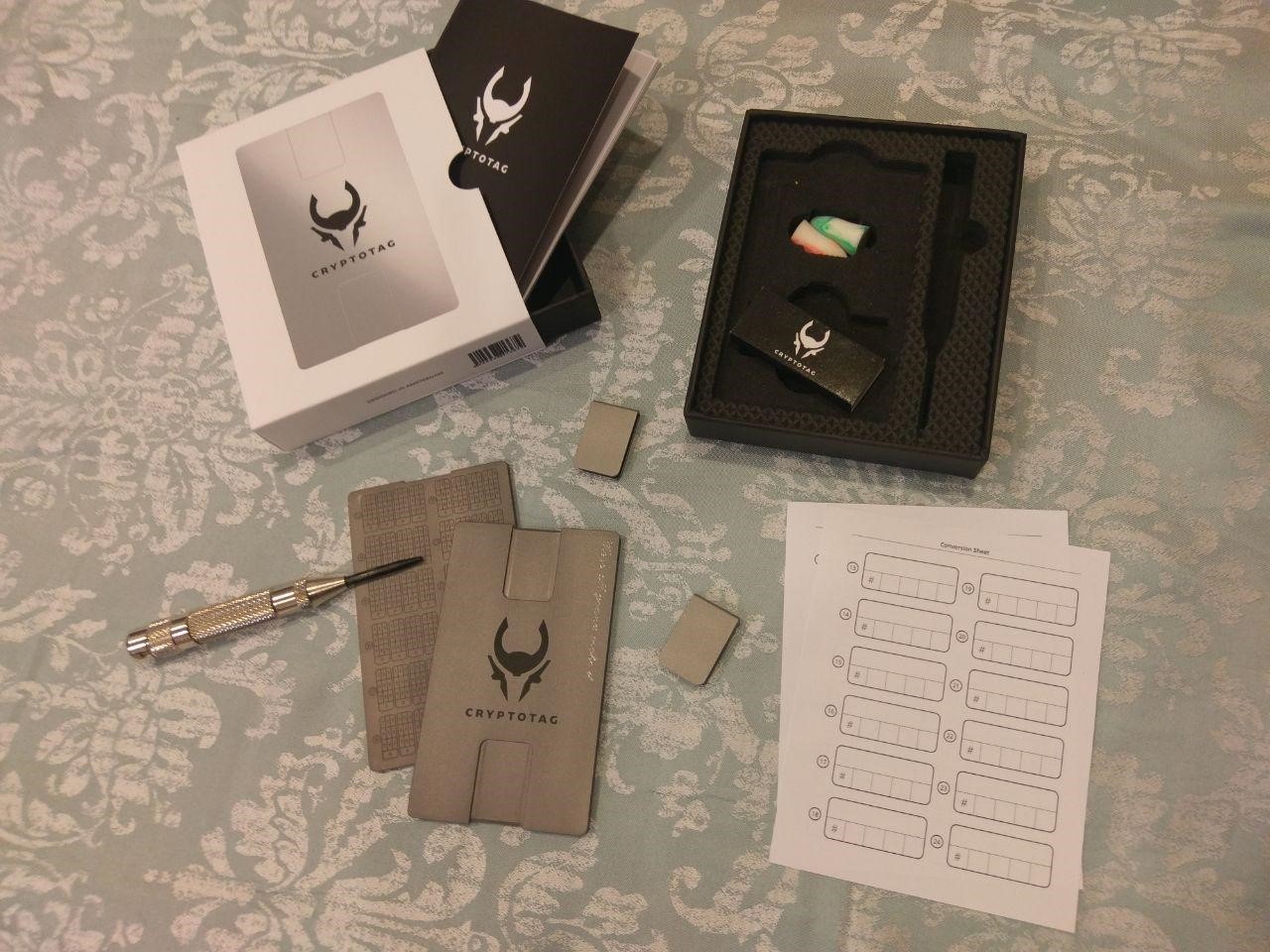 Down to brass tacks, Zeus has shed the hammer and alphabetical punch set needed in the Thor kit. Here, only the spring-loaded (German-made!) punch is needed to etch a key into the slabs. The way it works is by setting the point onto the desired numeric field, and then applying enough (body) weight onto the punch until its mechanism is activated. The punch will make a loud snapping noise (that’s what the earplugs are for, and they aren’t just for show), and drive a small, deep spherical marking into the metal presumably with considerable force. 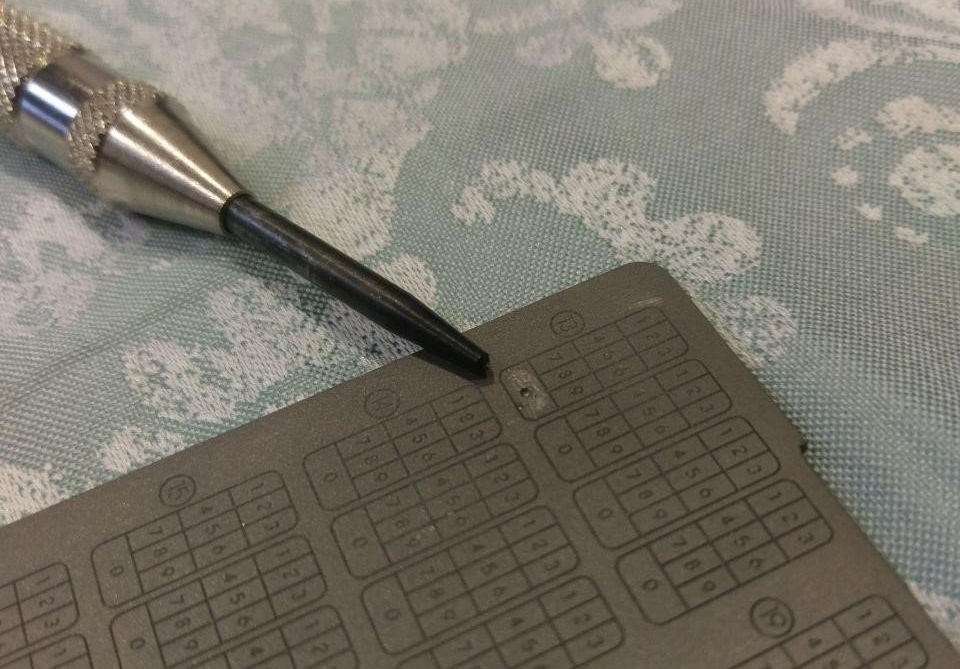 After a couple of false starts, it became easy, intuitive, and quite satisfying to drive home the markings (video example). It won’t take very long to inscribe your keywords this way, although you must obviously take care not to make any mistakes. You cannot undo this process at all, so correcting any mistake would require a sort of additional algorithm or pattern to signal a mistake; or just remembering where the mistake is, which is not viable and not the point.

CRYPTOTAG provide paper grids in the box where all of this can be sussed out beforehand. Users write down the exact pattern to be etched, so there is ample opportunity to catch any errors on the paper copies before they are transcribed into the metal. Another nice touch, they even provide some matches to burn, spy-like, your copy sheets when you’re done etching.

CRYPTOTAG have done something pretty cool, here. They have taken what was already a fool-proof, fantastic and extremely useful product and made it leaner, cheaper, easier, and better. It is a vast reduction in complexity over the previous product, and you can easily do it on any available surface.

It is possible that some users will prefer to just stamp keywords directly into the slabs, and for that the Thor is still available for just this style. And of course, it is possible to do this work on your own, sourcing your own materials and using your own tools. But it is probably not so easy to find machined, flat rectangles of titanium on the open market, as CRYPTOTAG have already produced them (disclaimer, I haven’t looked).

If you’re serious about backing up your crypto wealth, CRYPTOTAG is an excellent addition to any security layering. Whether you store your keywords in a bank vault or buried in some deep woods, you can be sure that no physical destruction of your “paper wallet” is possible with this product. As far as cold storage is concerned, you can’t do much better than this.