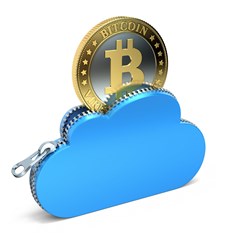 A bitcoin paper wallet is just the Bitcoin private key printed on a piece of paper.

Although paper is one particular medium of holding the private key there are other companies that have incorporated them into physical coins, such as Casascius.

Paper wallets are a form of cold wallet and essentially a bearer instrument – whoever holds them has access to both the Bitcoin private key and therefore the address.

So you could actually hand the wallet to someone in lieu of payment – they would have to trust that you didn’t have another copy of it though and wouldn’t run off and spend the balance before they could.

The private key creates the public key, which in turn creates the address – and due to some clever mathematics using elliptic curves and modular arithmetic in finite fields the process is achieved. First though let’s remind ourselves of the process.

One form of standard paper wallet is from bitaddress.org – the private address is generated using a client side javascript tool that calculated the address too. The format the wallet is presented in is with two QR codes and two numbers – the Bitcoin address in standard base-58 format and the private bitcoin key in the Wallet import Format or WIF.

They also give you the opportunity to make gift cards that have an amount stamped on them making them a form of note. 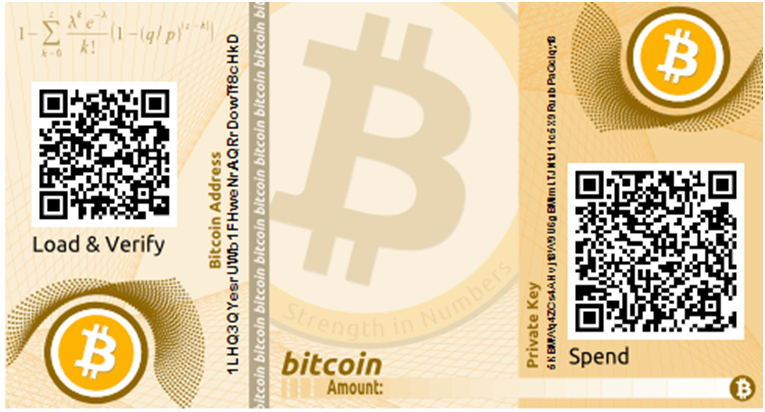 You can store this away in a vault – there is then no chance apart from through physical theft that your Bitcoins can be stolen from this address.

There are also various physical coins that come with various forms of tamper proof security. Casascius is probably the most famous of these, although in late 2013 they were stopped from selling loaded coins i.e coins containing Bitcoins – FinCen had classified them as a money transmitting business.

There are other coin producers such as Antana, Alitin and Titan Bitcoin who all provide various forms of bearer bitcoins.

One example of where the perils of a paper wallet can be seen is when a tv presenter showed his QR code for the private key live on television.

The private key was quickly used to spend the money in the Bitcoin address although later returned to the owner. Keep your private key safe!